How to go from Doctor to Doctorpreneur

From engineer to orthopaedic hand surgeon, and now the Chief Medical Officer and co-founder of Micro C Imaging, Dr Gregory Kolovich MD/MPH is the developer of a breakthrough hand-held fluoroscopy device that results in faster imaging during surgery, safer operation including reduced radiation, and increased flexibility.

While performing reconstructive hand surgery at Massachusetts General Hospital, Greg became frustrated with the traditional imaging process. This productivity and capability gap inspired him to design the Micro C. Dr Kolovich continues to practice orthopaedic surgery in Savannah, where he divides his time between his practice and developing his idea further.

What led you to choose an entrepreneurial career path? Did you have any previous interest or experience in it

I’m an engineer by training and in college, we engineered a design but lacked the resources to patent it. The design was later patented and sold by a company for a lot of money so I became disenchanted with the corporate aspects of money and power. I always felt like if you wanted to get something done, you have to do it from the ground up. So, at an early stage I got into medicine and I never really lost that entrepreneurial spirit.

Where did the idea for Micro C come from?

I did my hand and microsurgery fellowship at Harvard at Massachusetts General Hospital. We have a tonne of autonomy and you’re often operating at night, and often by yourself. That was exciting for me because I was a fellow and I wanted to do anything I could. When you’re operating by yourself in the middle of the night you’re often short on hands, and efficiency is paramount in emergencies. At the time we were using a 400-pound cumbersome C-arm x-ray machine that you had to lug into the operating suite. My engineering background told me that there was something not right about this. We’ve miniaturised cell phones and miniaturised so many other things so why can’t we miniaturise X-rays? This was the beginning of Micro C.

How did you end up developing Micro C?

After I had the idea I reread my own electrical engineering books and realised there really hadn’t been a lot of innovation in the X-ray tube design in 60 years. I contacted a lot of my engineering buddies down in Atlanta and got together a really smart team. Evan Ruff is our CEO and he leads our engineers. I pitched the idea to him. We thought about it for a month or two, ran the numbers on our novel design, and it turned out that it was physically possible. Once I knew that we had an idea here, then it became a question of how do we build it? I’m a doctor. I did not go to business school, so I basically had to do the grass roots thing. 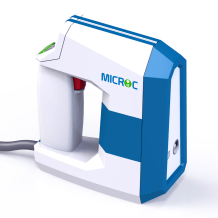 What have been the challenges?

In the beginning, we had to garner up money from family, friends and folks I knew. They were basically investing in me, without a prototype and with an idea. As we built it people told us it was impossible every step of the way, but we had a lab (and a prototype) to prove it was possible! Every step along the way we’ve overcome each engineering hurdle and it’s fuelled our desire to make it better, faster and safer

You already have different investors on board, how did you go about achieving that funding? What’s been the biggest challenge in getting it off the ground?

Ultimately when you have an idea – your friends, your family and other people who “get” your idea invest in you initially. You have to have start-up money, so I’m really grateful to the initial people who believed in me. Basically, a quarter of a million dollars was raised in my name and that allowed us to have the initial funds to make prototypes. This money came to us because people knew us and we were able to pitch the idea. It was about going to start-up events and getting people involved and getting the idea out.

The elevator pitch was what I did for almost 2 months. After that, once we got the idea off the ground and people saw that we had a real project and a prototype, then doctors got it and my phone started blowing up, my LinkedIn started blowing up. Soon you find yourself in a meeting in Atlanta with a major investor who wants to invest a million dollars. It just really kicks off. I liken it to bamboo. You water it for ages and nothing happens but then suddenly it kicks off and grows quickly. All of sudden we have greater responsibility, greater accountability and greater demand, so it drives us to do even more.

I liken it to bamboo. You water it for ages and nothing happens but then suddenly it kicks off and grows quickly.